The Comic Genius of Mickey Katz On the first day of a class I took at JTS on the Book of Esther, our professor asked if we regarded the Book of Esther as a comedy. Purim is fun, I thought to myself, and the Book of Esther has a lot of silliness in it, but is it really a comedy? The Jews' lives are threatened and it takes the bravery of one young woman to risk her own life to save her people from annihilation. And even after Esther confronts Ahashveirosh about Haman, the Jews are still not safe, ultimately engaging in a massacre of the citizens of the Persian empire that stood against them. 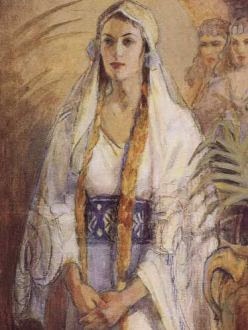 But many scholars present a different view. In the volume on the Book of Esther in the JPS Bible Commentary series, Adele Berlin writes that "it is a comedy, a book meant to be funny, to provoke laughter… [it is] throughout and at certain points uproariously funny." Berlin describes a variety of comedic elements found in Esther, including farce, a type of comedy designed to provoke simple hearty laughter, and burlesque, that which vulgarizes lofty material or treats ordinary material with mock dignity. Presenting a historical context for additional comic elements, Berlin writes that there are parallels in Esther with "stock characters in Greek comedy: the amusing alazon, an impostor or self-deceiving braggart (Haman); the eiron, the self-deprecatory and understanding character whose contest with the alazon is central to the comic plot (Mordecai); and the bomolochos, the buffoon whose antics add an extra comic element (Ahasuerus).

Indeed, a mere cursory reading of Esther will reveal many of the comic strands that Berlin expounds upon. Yet even if you regard the Esther as a complete farce, there is still much in the subtext to be taken seriously. The Book of Esther is a diaspora tale in which Jews are capable of reaching high levels of success (such as Mordechai who sits at the King's gate) yet security is tenuous as the Jews are also subject to the whims of a foolish ruler influenced by a vengeful minister. There's a character who is so distraught by a rival's "insolence" that he cannot enjoy his own success. And then there's a young woman who must her weigh her own needs against those of her community.

Do these themes sound familiar? Do we not witness or even experience them in our own time? The Book of Esther may be more comedy than true drama, but what makes it such compelling comedy is the degree of recognizable reality behind the burlesque portrayal of Jewish life in ancient Persia.

If I say the name Mickey Katz, most people familiar with his music will immediately think comedy--at the very least, parody if not utter buf 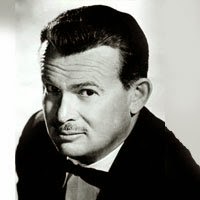 foonery. His most popular songs were spoofs of classic and contemporary hits full of Yiddish, Yinglish and faux-Yiddish lyrics sung in a mockingly nasal voice (imagine someone with a kazoo for vocal chords), with plenty of added schmaltz.

Despite the silliness inherent in his songs and delivery, there are two things in my mind that raise Katz's music from being mere inanity. First, his lyrics are very funny, specifically in a cleverly Jewish way, and even more specifically, in a New York Jewish kind of way. Katz takes well-known popular and folk songs and recasts the characters and situations in the spirit of Manhattan's Lower East Side.

On Mickey Katz and His Orchestra, we are introduced to Duvid Crockett, who, in contrast to his pioneer counterpart who was born in the mountains of Tennessee, Katz's protagonist was "Born in de wilds of Delancey Street." And while America's hero, Davey Crocket, "Kilt him a bar when he was only three," Duvid displayed an early prowess for shechting when he bravely "Flicked him a chicken when he was only three." 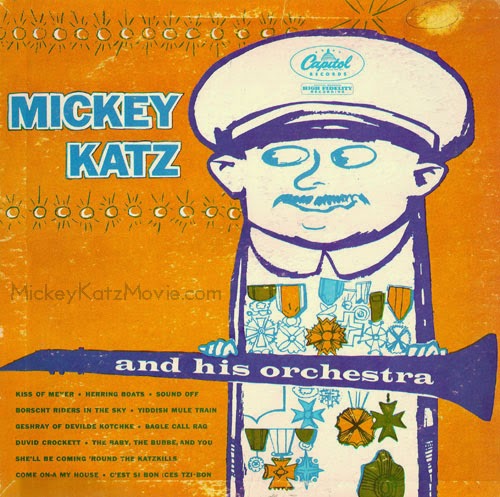 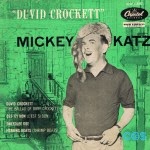 Among Duvid's other exploits, some of which mirror those of his American legend parallel, the ballad recounts how "In eighteen-toiteen, he fought Indianers, den came de Litvaks and de Galitzianers." After meeting the love of his life, "Daisy Freydel," we're told that "From near und far, dey came to the hippie, elected him president of de B'nai Mississippi."

The new couple make their way to Las Vegas where Duvid, nebach, looses all his money at the craps table. Katz relates that "He felt very sad, dat's my opinion, he would of said kaddish but he couldn't find a minyan." The choir then sings the refrain, "Duvid, Duvid Crocket" in minor, comically conveying the reversal of fortune, with the song concluding that "He's back on Delancey Street." 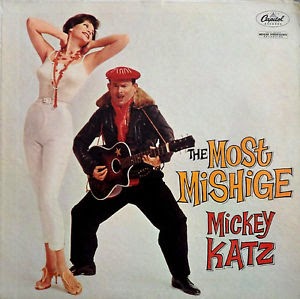 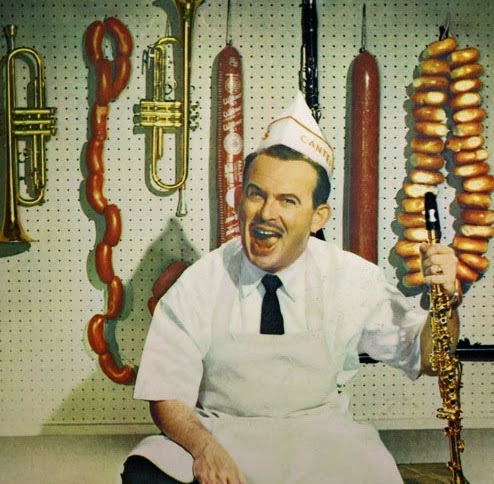 A little more obscure for today's audiences (I'll admit I had to look it up myself) is Yiddish Mule Train, Katz's parody of Mule Train. The original depicts a wagon driver singing of the variety of goods he must deliver to far-flung regions of the Old West. In Ktaz's adaptation, the delivery man rides his mule around the country shlepping goods to Yidden across the country. Among his inventory and clientele, the Yiddish Mule Driver sings that,

There's a package of salami for a minyan in Miami.

There's a load of lox and bagel for a cowboy in Las Veygel.

There's a very shnazzy hippie for a goil in Mississippi.

There's a shaytel for a bobbe in the vilds of Manitoba.

And my personal favorite:

There's a couple falshe oigen for a shames in Sheboygan.

While this line may not be the one that most people relate to, as a Hazzan working in Milwaukee, I find it hysterical that Katz effectively incorporates, of all places, Sheboygan into a song, let alone any city in Wisconsin.

Mimicking the bellowing of the original Frankie Laine recording, Katz wails "Get aloooong Mule!" and offers various words of Yiddish encouragement (or rather rebuke) to his Mule including "Clippety clop you alter-clopper" and "Keep a shuckel oy di alter shkopper." 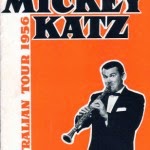 The second element that makes Katz's recordings is the quality of the music itself. Supporting Katz's relentless onslaught of gags, puns, and pseudo-Yiddish phrases, is a superb band that captures the feel of each original song (be it jazz, rock, or country/blue grass) while infusing it with a Jewish flavor. Sometimes it's just a touch, such as the klezmer bulgar bass line played by the trombonist Si Zentner in Geshray of Devilde Kotchke (parody of Cry of the Wild Goose) or the trumpets adding krechts to their horn responses to Katz's "yippie yai yay" cowboy calls of in Borscht Riders in the Sky (parody of Ghost Riders in the Sky). Other times, Katz's band breaks into an all out klezmer routine midway through the song, as in Sound Off, a Jewish take on serving in the army, and She’ll Be Coming ‘Round the Katzkills which also includes a nice clarinet solo, presumably by Katz who himself was a virtuoso clarinetist, and a standard 8-5-1 klezmer ending. 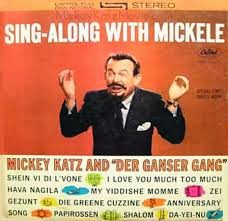 Perhaps the best example of the balance between schtick and serious musicianship is in Bagel Call Rag (parody of Bugle Call Rag). Following a silly introduction by Katz, trumpeter Mannie Klein plays a clichéd bugle-esque line but in minor rather than major. Normally I would go into my "Jewish music isn't all in minor" rant, but in this context, the gag is well taken. Within the song, Katz even acknowledges the the joking nature, riffing, "Now folks you know that this Bagel Call, that's strictly playing for a gag. Beat it out Sammy Weiss let's hear the Bugle Call Rag." Weiss plays a march beat on the snare, Klein reenters with the lick in major, the band kicks into an authentic Dixieland groove, and Klein belts out a bona fide New Orleans solo.

Even in the midst of the joke which is each of Katz's songs, the musicianship is unmistakable. Of course, in the latter song, the juxtaposition of the Jewish version with the Dixieland presents a complicated question of which is the "legit" one and which is the gag. On one level, the Dixieland rendition is the "real" way to play it and the Jewish-minor playing is just for laughs. On the other hand, the riff played in minor is more true to Katz's style and the Dixieland playing is conspicuously (and humorously) out of place. 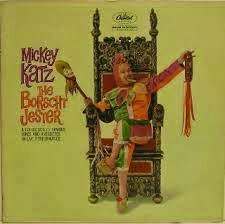 Just for Laughs or Something More?

The Book of Esther ingeniously mixes comedy with familiar, timeless, real-life situations. Similarly, Katz's music may be played for laughs, but behind the unabashed silliness is a clever melding of popular American and Yiddish culture, and a top notch band that gives Katz's buffoonery musical legitimacy.