How Do You Spell Hanukah, Chanuka, Chanukah?

If you go to the store to buy candles, banners, napkins or other accessories for Chanukah, you'll likely find multiple attempts to transliterate this word whose letters do not all have an equivalent in English. Is it Chanukah? Chanuka? Hanukah? Jannooqa??? You'll see them all. But none of these spellings quite works for this month's album (which, oddly enough, spells it differently on the front and back covers). For on the opening track, Happy Chanukah, the spelling of Moishe Oysher's authentic Yiddish pronunciation of the aforementioned holiday is more accurately represented as "Chanikeh." The "i" is pronounced short as is in the word "it," and the "eh" sounds like a combination of the short "e" in the word "get," a short "a" as in the word "above," and a short "i" as before. The phonetic analysis, of course, does not do the pronunciation justice. You just have to hear it.

"Hot a gitn Chanikeh, Hot a gitn Chanikeh" Oysher joyously sings in the opening track as a bulgar rhythm accompanies him. Oysher continues with the words of Al Hanisim interspersed with nigun-esque scat. His singing is punchy on certain words, but also frequently behind the beat, typical of both klezmer and jazz. 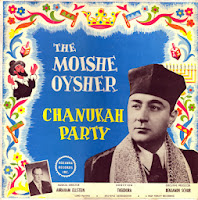 Next, Oysher leads us in the blessings for the Chanukah candles. For the first blessing, "l'hadlik ner," Oysher sings a simple, yet beautiful, duet with his niece, Marilyn Sternberg, the album's featured soloist. The second blessing features a rousing march-like refrain on the words "she'asa nisim la'avoteinu--who performed miracles for our ancestors." Following a dramatic opening (beginning on a high G) the third blessing, Sheheheyanu, breaks into a swing at the hatimah with Oysher again showing off his penchant for jazz. The effective combination of an operatic voice singing Jewish text with a swing rhythm should not be under-appreciated. Most singers would just sound shlocky. But somehow, Oysher is successful. Perhaps it's the fact that he is so skilled in both the worlds, that of the synagogue and jazz, that he is able to combine the two so convincingly into something that is in and of itself authentic. Many try. Moishe Oysher pulls it off.

Side 1 concludes with "Maoz Tzur." The first stanza is sung by the choir in a straight ahead choral arrangement. Following an English Horn interlude in Ukrainian Dorian, Sternberg enters to sing the fifth stanza, "Y'vanim nikb'tzu alai" (the only stanza that actually mentions the story of Chanukah). Oysher then joins her in another beautiful harmony, similar to their earlier duet. Preceded by a trumpet fanfare, the choir then returns and joins Oysher for a triumphant finish.

And Now For Some Good Old Hazzunes!

oishe Oysher Chanukah Party album features two mamash pieces of hazzanut. The first is "V'lirushalayim Irkha" from the weekday Amidah. Though not technically part of the Chanukah repertoire, it is linked to Chanukah through the shared theme of the restoration of Jerusalem. As mentioned above regarding his pronunciation of the word Chanikeh, the beauty of Oysher's singing is not just in his vocal artistry, cantorial nuances, and musical interpretation, but also in his pronunciation of Hebrew. After the word "V'lirushalayim," which Oysher sings with a subtle krecht (the type Cantor Jack Mendelson would call a "hiccup") we hear the word "irkha" pronounced "irkhu" (the "u" pronounced as in the word "put"), "b'tokha" pronounced "b'soykha," and "dibarta" ever so subtly sung as "dibartah" (the final vowel pronounced "awe"). As a faithful student of modern, Israeli Hebrew, I should not approve of such pronunciation. But without it, the music would not be the same. In this style, the old world flavor helps communicate the longing for a return to Zion from the emptiness of the Diaspora. True, Oysher's pleading tone and contrasting dynamics communicate this sentiment just fine, but the pronunciation twists your heart that much further, combining the conflicting sentiments of hope and despair.

I transcribed two cantorial runs from this piece that I particularly like. At the conclusion of the first, on the words "binyan olam," you'll notice he does not exactly say "olam" or even "oylom," but adds some additional consonant sounds which accentuate the musical embellishments, rendering it something like "o'w'hoy'lom." My Hebrew professor is pulling her hair out, but Cantor Mendelson exclaims "Mommy!"

The second is on the word "uv'nei." Grammarians will balk at Oysher's pronouncing the sh'va under the letter vet, insisting that it is a sh'va m'rakhef, not a sh'va na! Too bad. Oysher can pronounce it as he likes! And besides, it's a nice riff.

Rounding out the album is "Shema Yisroel" from the Musaf Kedusha. Beginning with a choral rendition of the Sh'ma, the piece continues with a sort of call and response with the choir lyrically singing "Hu Eloheinu" and Oysher echoing in cantorial fashion. The strings then hold out an E chord over which Oysher sings the following low, serpentine lick:

Though it's not really part of the line, I felt it necessary to include Oysher's tongue click that precedes his actual singing. A modern sound engineer might have edited it out. But to me, it's part of the spontaneous performance. Every time I play this track, I listen closely for it.

Oysher continues with a beautiful improvisation with more impressive hazzanut and old world inflections, my favorite being the pronunciation of "sheinit" not just as "sheinis" but as "sheinizs." Next comes a melodic interplay between Oysher and the choir on "V'hu yashmi'einu" For the first two-thirds, Oysher sings the lead with the choir adding fills, then the choir takes the lead with Oysher adding complimentary accents and echoes. It's a great arrangement that should be a staple of every synagogue. (You're with me on this, right?) And as great as this track is on record, you really need to see the cinematic rendition featuring Oysher as the cantor, women in the balcony swooning, and a male congregant daintily faux-conducting. A must see for all lovers of hazzanut, especially of Moishe Oysher.

When I originally posted this article on my blog, www.thehazz.net, I received a number of complaints (OK, two, but two is a number) that I did not make mention of the Yiddish tracks on this album. Therefore, I will now gladly write about these three Yiddish gems on which Oysher is equally masterful on these songs as he is on the other selections.

First is "Regn." After beginning with a playfully bouncing niggun, Oysher sings the word "regn" in a rubato cantorial fashion with his usual beautiful coloratura. He is backed by a small instrumental ensemble, but you can just imagine a choir of meshorerim humming with quiet intensity behind him. The stanza is followed by the Hebrew refrain, “Ba’avuro al timna mayim” from Geshem the famous Sukkot prayer for rain, traditionally a synagogue highlight. Beginning the second stanza, Oysher’s coloratura ventures briefly into a beautiful falsetto, before returning to his usual full voice. The momentary diversion provides a striking contrast, further
underscoring Oysher’s broad talents. Thematically, this impassioned plea for rain to nourish the parched fields and help the singer’s poor family survive may seem out of place on a Chanukah album, but its inclusion is explained by the assertion that the precious gift of rain that we pray for on Sh’mini Atzeret sometimes doesn’t arrive until Chanukah. A bit of a stretch, but no matter. It's a wonderful addition all the same.

If "Regn" is a little on the sobering side, "Cirba" is all fun. After a extended introduction in free-rhythm, Oysher burst into a Yiddish patter. About the only words I can make out are “Chanukah Tanzn,” but that’s OK. For without even understanding the majority of the lyrics, you can tell there’s nothing but joy emanating from him. Following one of Oysher’s patented jazzy niggunim, the song ends passionately with “Tanz mit mir di Cirba!” There’s much more to describe here, but, as with the rest of the album, you really have to hear it yourself. "Drei Dreydele" is another fun romp about the joys of Chanukah—food and drink, camaraderie, the menorah, and, of course, the dreidel. Among the invited guests to the party are the apikorsim (nonbelievers or scoffers) who, though they’re not going to participate, will nonetheless witness the miracle of Chanukah. I find this line interesting, and not only because it has to be the only song ever written to use the word apikoros. (If I am wrong on this one, please, by all means let me know. And no, the song Apikoros by the Eskimo Twins doesn't count as it’s a techno jam without lyrics.) No doubt, there’s some lighthearted mockery here aimed at the nonbelievers. But is it sheer mockery or is there also a measure sense of hope, however small, that by inviting the outsiders to your Chanukah party, they may be pulled back into the fold? Or am I reading too much into it…

"My name is Shoshana Oysher, and I'm eleven years old. Because Chanukah is also a children's holiday, my father gives me as Chanukah gelt the privilege to narrate The Chanukah party."

As with Oysher's other two holiday albums (The Moishe Oysher Seder, and Kol Nidre Night With Moishe Oysher), The Moyshe Oysher Chanukah Party is interspersed with narration. While the other two feature famous radio personality Barry Gray, this album is narrated by Oysher's daughter Shoshana. Meant as a cute way to introduce each song, the narration is rather trite and sounds more silly than sincere. And yet, it's all part of the fun. Once you get past saccharine lines such as "The kindling of the little candles and the burning of their unflickering lights serves a symbol of the undying light that is Israel, Torah, and the Lord," delivered in Oysher junior's girlish New York accent, you've got one great track after another. 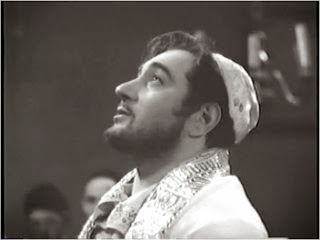 Why has Moishe Oysher always been one of my favorite cantors? Perhaps it's the quality of his voice, from the lush timbre of his absolute lowest register, to the booming sound of his highest notes. Maybe it's his penchant for jazz, inducing his hazzanut with swing rhythms and scat singing. Or maybe it's just a certain ta'am--a flavor that his voice possesses. Whenever Oysher sings, he also seems to be speaking. No, it's not sprechstimme, or even recitative, but his singing definitely has the quality of conversing, conversing in a (now) lost dialect of the old country, passed down to him from five generations of cantors preceding him. All of these elements are on full artistic display in this wonderful album.