“I have learned much wisdom from my teacher, more from my colleagues and the most from my students” (BT Ta'anit 7a).

I recently taught an adult ed class on Yerushaliyim Shel Zahav. The goal was to help participants gain an understanding of the lyrics and some of the song’s history. In particular, I wanted to highlight the Judaic references in the song and how Naomi Shemer cleverly incorporates them.

Some of the references I had been taught. Others I researched myself. While I walked into the class already feeling confident in my understanding of the song, the depth of some of the lyrics only become apparent to me while engaged in a dialogue with the participants, many of whom had never looked at the meaning of the words. Below is a summary of what we discussed. 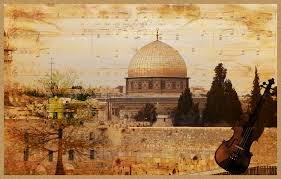 When considering the meaning of the song, it is important to remember that it was written in 1967, prior to the Six-Day War and the reunification of Jerusalem. In its praises of Jerusalem, there is also the sense of sadness in the Jews’ not having full access to Jerusalem.

Opening with praises of beauty, Shemer closes the first stanza referring to Jersualem as a city that sits solitary with a wall in its heart. The “wall” is an obvious reference to the Kotel, and “heart” is a beautiful way of personifying Jerusalem as a loving, emotional being. “Sits solitary” is a reference to the opening line of Eikha—Lamentations, “Lonely sits the city.” By referencing Eikha, Shemer makes a bold statement: We may have our homeland, but we are still living, to a degree, in exile without full sovereignty of Jerusalem. The astute listener will recognize this biblical reference and be reminded of the sorrow of Eikha.

When the refrain enters, we hear the the title of the song which comes from the legend of Rabbi Akiva who, as a poor man, promised his wife that when he became wealthy, he would buy her a Jerusalem of Gold. This refers to a gold crown with turrets in the shape of the walls of Jerusalem that women used to wear. In using the term Yerushalayim Shel Zahav, Shemer may simply be poetically stating how beautiful and precious Jerusalem is. But in referencing the story of Rabbi Akiva, it is possible that Shemer is alluding to the circumstances faced by Rabbi Akiva and his wife—a sense of despair in one’s current condition (being poor/lacking a Jewish presence in the Old City) but also a belief in a better time to come.

The words “for all your songs I am a lyre,” come from a poem by Yehuda Halevi, the Medieval Spanish Jewish poet, who closed his poem “Libi B’mizrah—My Heart is in the East” with the words “I am like a lyre for all your songs.” In referencing this poem, Naomi Shemer further accentuates the notion of living in exile while Jerusalem remains in foreign hands. To comprehend the degree to which Shemer’s referencing Halevi’s poem underscores this sentiment, let’s look at the opening words of Libi B’mizrah.

At the time that Shemer wrote Yerushalayim Shel Zahav, Israel had been an independent, sovereign state for almost twenty years. Yet she still conveys a sense of emptiness without Jersualem.

The second stanza again references Lamentations, sharing the opening words, “Eikha yashvu” (“Eikha yash’va” are words in the original text). Shemer laments that the market-place is empty (anther reference to the desolate Jerusalem of Eikha) and that Jews are not able to ascend the Temple Mount. Further describing the emptiness of Jersualem, Shemer writes that the winds are howling through the mountain caves. To me, this is the Jerusalem version of an Old West ghost town with the empty buildings, whistling winds, and rolling tumbleweed. Lastly, Shemer notes with sadness that no one can go to the Dead Sea by way of Jericho.

In the third stanza, Shemer writes that while offering her praises, she is the smallest or least worthy of all of the children of Israel to offer such praises. The word Shemer uses for smallest is “katonti,” the word that Jacob uses in a display of humility before beseeching God for protection from his brother Eisav (B’reishit 32:10). What is Shemer’s motivation for approaching the land of Israel with humility? Is she ascribing divine status to the Holy Land? Is she, like Jacob, preparing to make a petition?

The answer may be found in the second half of the stanza in which Shemer states:

This is a very curious lyric, whose meaning is not clear to me. My interpretation is that there are some words to which we have such a strong emotional tie that they can actually cause a visceral, physical reaction within us, be it the chills, “butterflies,” or a shock in the heart when we hear them. For Shemer, “Jerusalem” may be such a word, and the physical response she describes is that of the fiery kiss of an angel.

The stanza ends with what appears to be a sentence fragment:

If I forget thee, Jerusalem,
Which is all gold

“If” statements are typically followed by a “Then” clause. Here, Shemer never states a consequence for forgetting Jerusalem. While it might initially leave the listener in suspense, when we recognize the source of the lyric, we realize that nothing more must be said. First, it comes from Psalm 137, which begins with the words “Al naharot Bavel—By the rivers of Babylon, the well-known psalm of exile. By quoting Psalm 137, Shemer again casts the Jews as living in a state of exile without full control of Jerusalem. 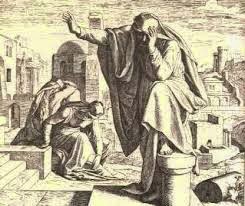 Second, this phrase is so familiar that once she says the first few words, the listener can fill in the rest (…may my right hand wither. May my tongue cling to the roof of my mouth if I do not remember you, if I do not consider Jerusalem my highest joy.) It’s similar to someone in America saying “If the shoe fits…” or “When in Rome…” Both are technically sentence fragments, but the sayings are so well known that there is no need to complete them. (Note: I just looked it up and apparently there is actually a term for this known as anapodoton. Who knew?) 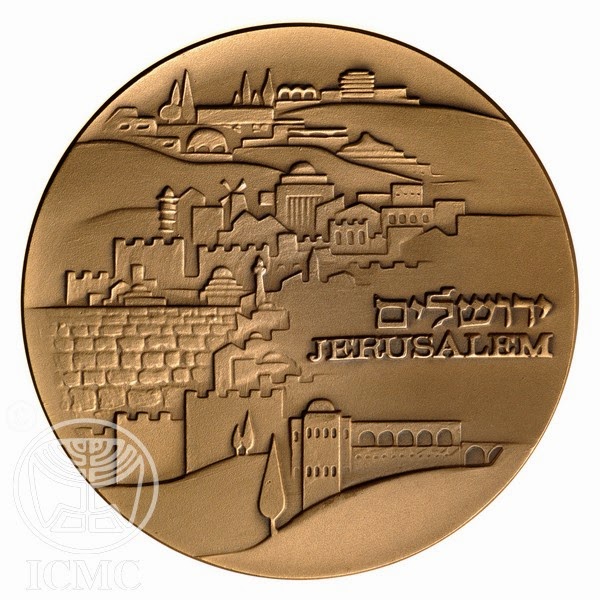 Following the Six-Day War and the reunification of Jerusalem, Shemer wrote an additional stanza. People now return to the market-place which was until recently empty, and to the cisterns which were previously dry. The shofar is a sounded in the Old City, a reference to the blowing of the shofar at the Western Wall at the end of the war. In the mountain caves through which the wind once howled, now “thousands of suns shine.” It is not clear to me if this image refers to anything specific. Are the shining suns people? A metaphor for the dawning of a new age? Or is it simply a positive contrast to what came before?

The stanza concludes with the bold invitation to travel to the Dead See by way of Jericho. The passage to the Dead Sea via Jericho, once prohibited to Jews, is now open. Shemer boldly proclaims that it is ours, and we will traverse it as we please.

Shortly after her death, it was discovered that Shemer had confessed that she had not written the melody herself, but based it on the melody of a Basque lullaby called Pello Joxepe, composed by Juan Francisco Petriarena 'Xenpelar' (1835-1869). She had heard the song in 1962 when singer/songwriter Paco Ibáñez performed it in a 1962 concert in Israel.

I recently listened to Pello Joxepe for the first time, and I can definitely hear the similarities, particularly in the stanza of Yerushalayim Shel Zahav. The refrain too bears some resemblance, but Shemer alters the melody, most noticeably rising in pitch on the final line with the words, “halo l’khol shirayikh.”
Should the revelation that Shemer did not compose the melody completely by herself change how we feel about the song, or Shemer’s role in composing it? Had Shemer been open from the beginning about its source, would it have been so strongly and widely embraced by Jews in Israel and abroad? It’s hard to say. My guess is that the song is strong enough and the sentiment powerful enough to have captured the hearts of Jews in Israel and around the world even if it’s source had been revealed early on. After all, Hatikvah is based on a Romanian folk melody and I have yet to meet anyone who, upon hearing of this, has renounced their love of Hatikvah on these grounds. However, while it might not have damaged Shemer’s reputation as a songwriter, it might have challenged some of the mystique surrounding her as a brilliant composer of songs (in particular this one) that speak to the heart of Israeli identity.

Yerushalayim Shel Zahav was first performed at the 1967 Israel Song Festival by Shuly Natan. It is interesting to note that despite being the most famous song to come out of the festival that year (or any year for that matter) Yerushalayim Shel Zahav did not win first prize. Nor did it win second or third. In fact, it wasn’t even a part of the competition. Instead, it was composed for the time during which the votes were counted.

I am deeply envious of those who were in attendance at its debut. What would it have been like to hear Yerushalayim Shel Zahav for the very first time? The closest I can get is when I listen to the original recording on my 45 RPM record which I found at a secondhand bookstore in Jerusalem. The performance is beautiful and only enhanced by the fuzzy sound of the old vinyl. But the part that really gets me, the part that gives me the chills every time, is at the end, when Natan sings the refrain for the final time, you can hear the audience join in quietly yet devoutly. Words cannot describe the feeling I get when I imagine that I am with this group, hearing Yerushalayim Shel Zahav for the very first time, so moved by the words and melody that we all join in. 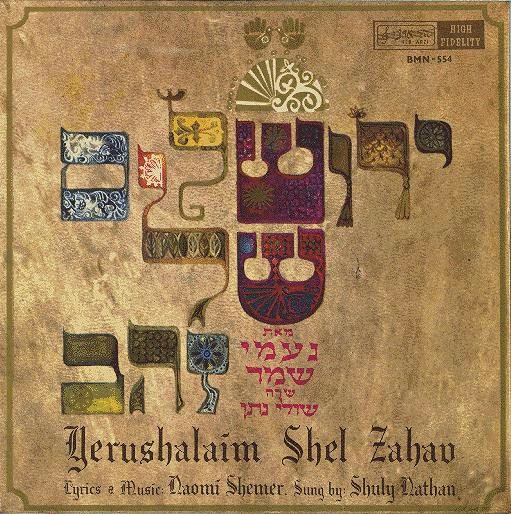 Maybe I could say I was there, in a collective memory sort of way. Kind of like all Jews’ being together for the revelation at Sinai. If we were all there at Sinai, why can’t we say we were all there in 67? Am I overstating the significance of Yerushalayim Shel Zahav by making such a comparison? Probably. Yet there are moments in history that, despite our not having been part of them, are so engrained in our minds, our hearts, our kishkes that the only way we can fathom having such a strong connection is to imagine that we were, in fact, there when it happened.

On The Flip Side: Ha’amini Yom Yavo

The B-side of the 45 features Ha’amini Yom Yavo—Believe It, The Day Will Come—also recorded live at the 1967 Israel Song Festival. Ha’amini is a classic “I’m away fighting a war now but someday it will all be over and we’ll live together peacefully” song, and is a striking contrast from it’s A-side counterpart. Yerushalayim Shel Zahav is performed softly by a solo voice, singing with a fluid rhythm, almost floating above the gentle fingerpicking guitar accompaniment. In contrast, Ha’amini is sung resolutely by a group of singers backed by an accordion and a driving bass. The combination gives the sense of an anthemic, military march. Although the author certainly regrets having to fight in a war, there is a spirit of pride in the music that conveys a sense of duty and honor in serving one’s country.